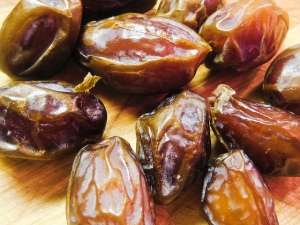 On a good day, if I am hungry and need a little something extra to tide me over before dinner (but otherwise have stuck to my diet), I might take a trip to the grocery store by my work. However, before I go I try to visualize what I am going to buy, because if I don’t then the cookies, candy, and even trail mix starts calling my name as I enter the door. 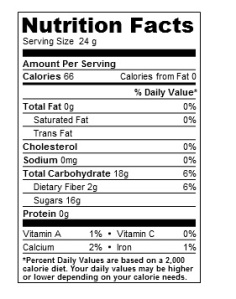 One of the treats that I used to get on these days was medjool dates (they are delicious).  I would get a bag of three or four and call it a day.  The only problem is that once I looked up calories of just one (66 cal.) with most of these coming from sugar (I should have known this seeing as they taste like caramel) meant that for four of these I would be  eating 266 cal. and 64g of sugar (which is a lot for a snack, I could have almost nine whole carrots for that many calories).

This is an example of how even when we think we are being healthy, it is easy to reach for snacks that “appear” healthy, but are just as bad as some processed foods (well maybe not as bad as that, it still has fiber).  A similar situation is how some parents try to pack dried fruits or trail mix instead of fruit snacks or Hostess cupcakes.  But those dried mango prices that were so popular at Costco a couple years ago are crammed with sugar.  And the average trail mix has significantly more calories in it then people would think, it is nuts and dried fruit, with chocolate.

Today I was able to grab a tangerine and call it good.  But I have to remind myself that if something tastes too good to be healthy, then it most likely is, even if it is fruit.

Last year was a breakthrough year for me personally, as far as writing was concerned. After years of wanting to finish a novel. Making it a resolution each and every December only to get to the end of the year with nothing. 2018 was the year of change. Two major things that happened. First was to let go of the absurd notion that in order to put words on the page I had to be inspired by my muse. This idea was thrown in the trash where it joined crumpled wads of unfinished drafts. Second was the realization that to finish a novel I needed a process in order to write consistently. There was some initial trial and error in setting up a schedule that worked into my life but by the end of 2018 I had finished two books and was heading into the second round of edits on my first. What I want to do in this blog is share the experience of being a new writer by exploring my writing process as it develops. I’ll also be posting some of my short fiction and possibly book reviews time permitting.

One thought on “The danger of medjool dates”