Today we did another DSE run (they host them every week, so if your in the Bay Area you should come check one out, $5 for a race isn’t bad) the first one we did was the Embarcadero 10k and today’s race was the Golden Gate Vista 10k.

One of our friends had told us about it so Alex and I agreed to do the run without really reading anything about it or doing any research on the course.  The run was at lands end in SF and for those who don’t know, this is one of the hilly parts of the city (I know, where is it not hilly).  The run starts on a trail and then goes along the coast, where it peeks on a hill (or small mountain) over looking the Golden Gate bridge.

Without having looked at the map or realizing where the run was going to be held, it was a little bit of a shock when we got there and our friend told us it was going to be hilly.  The first half of the run went fine, knowing that there were going to be hills, until we got to the mini-mountain and struggling to get to the top of this thing.  There were a couple of guys in front of me, and just seeing them keep going helped to motivate me to keep going.  Getting to the top without stopping was my accomplishment for the day and it did make me feel good about the race.

Over all I ran the race in 54 min, which with all the hills was better then I thought I was going to do.  My comment to Alex in general about the race was how strange it still is sometimes to think that we just wake up and run six miles now.  Both of us agreed to the run without really thinking about it and not worrying about not being able to complete the run or dying along the road on the way.

Left to right: Me, Nathaniel, Billy and Alli.

Without really worrying about it I told her we would do it – not even knowing the name of the race where it was or anything other than the fact it was in San Francisco and only cost $5 to participate in.

It’s so amazing to me that a year ago I couldn’t even jog a ¼ mile without dying and now I’ve completed a half marathon and can run a 10k any given Sunday without really worrying about it.

The only thing I do differently leading up to it is eat a different breakfast than I would normally eat. Usually I like to have a banana and orange juice before a 10k but today I had toast with peanut butter and orange juice.

Anyways – the date kind of snuck up on us and just after 8am this morning Nathaniel and I were pulling into a parking lot near Sutro Baths in San Francisco with our friends in the car behind us.

It was a brisk morning and we were quite cold as we checked in, paid our fees and just stood around waiting for the 9 o’clock start to roll around. A tall guy (about 6’5’’) sidled up behind Billy and was eyeing him really obviously.

It annoys Billy when people comment on his height or react strangely to him because he is tall so I told the guy “Yeah – he’s taller than you.” Which really embarrassed him and he wandered away…

Soon it was time for the race to start and Billy (the only one of us who has done a marathon) told us the course was going to be hard. I seriously hadn’t even known where the race was until we got into the car and were heading north towards the city … but Billy telling us it was going to be hard worried me a little bit.

We took off at 9 am and the big group of us went looping through the parking lot and then off road to a nice trail with views of the Golden Gate Bridge. The view was fantastic for most of the run and around mile 1 we hit a staircase and I had to climb it – not running. 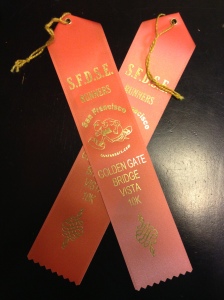 To be fair- the stairs were spaced really strangely for running. Only really tall people would be able to run them normally but for the rest of us you have to either bound up them or take a strange step and a half for every stair.

Those stairs were the only thing that really killed me on the run. I was dying by the time I got to the top of them (partially because my muscles were still cold).

I noticed a long time ago it takes me about two miles to start enjoying a run – after that I can cruise a long for a while and just be really happy to be out moving.

During the Las Vegas half Marathon I felt like shit from mile 0-2 and 9-13. Everything in between was fantastic.

I caught Billy and Alli on a long sloping hill near the three-mile mark and passed them near the top of it. Alli (sorry if this annoys you) is a lot thinner than me but doesn’t run as much and she has asthma. If she ran as much as I did she would totally kill me because I outweigh her by 20-30 lbs.

After I passed them on the downhill portion of that hill it was probably another half mile till we started climbing again. And then it was maybe another mile of long sloping hill.

I didn’t actually need to stop at any point on the race except for the stairs although I did walk with Billy and Alli for a few minutes.

The last big hill it came down to just making myself do it. I was slowly trotting up it and near the top stopped and took about two walking steps before I told myself I was being lazy and that I could finish it – and then I started running again.

Although the course was hilly and hard I set a new PR today by about 2 minutes.

I was really happy with how I did and it has me motivated me to start running on a more regular basis.

On New Year’s Day my friend Lauren and I went hiking while her husband Michael and Nathaniel went surfing.

Yesterday my blog post kind of sucked but today I actually have something to write about.

I can see more than a few reasons for this.

San Francisco has a really mild climate – it’s “cold” and foggy a lot but really our day time temperatures don’t fluctuate by more than 20-30 degrees year round. We also have a crazy number of gyms, outdoor activities and healthy restaurants to choose from.

Las Vegas gets snow in the winter AND routinely faces temperatures in the triple digits. Nevada also allows smoking indoors and we all know how fantastic that is for you.

What is really interesting about these lists is the median price per square foot of living space is 3-4 times higher in the healthy cities than in the unhealthy cities.

According to Men’s Health Magazine 30.6% of San Franciscans eat veggies 5+ times a day.  Today I’ve eaten four servings of fruit/ veggies and I haven’t had dinner yet so that number doesn’t seem unreasonably high.

It makes me sad when numbers come out like this highlighting the class discrepancy between the healthy and the overweight.  Yes, there are plenty of well educated, well paid overweight people and plenty of thin people living in impoverished neighborhoods BUT percentages don’t lie.

You are far more likely to be overweight if you have a lower income for a variety of reasons that we can go into in future blogs. In the meantime – if you live in the Bay Area take advantage and get outside!